What are we going to do about … 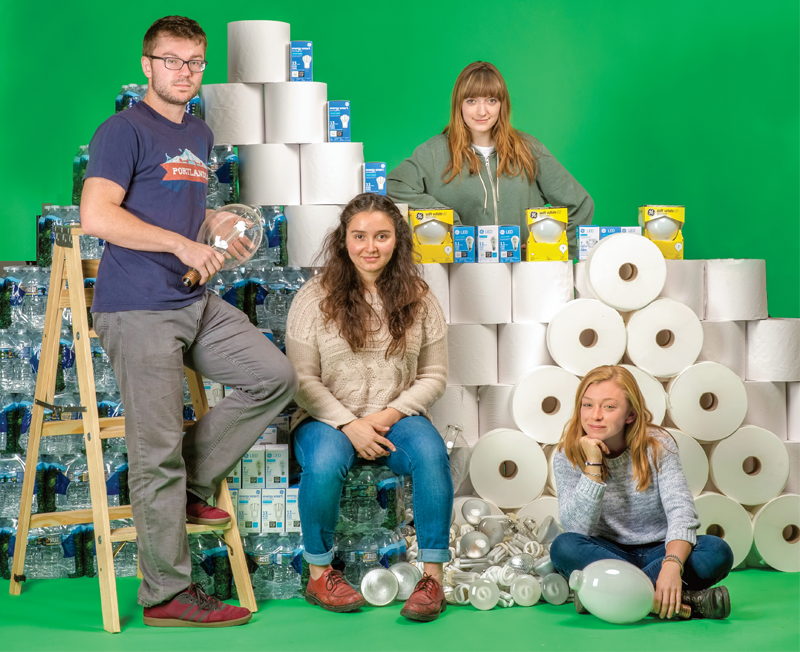 When Kenyon pledged to achieve a net zero carbon footprint by 2040, three students went to work tracking how much energy it takes to run the College during the course of a year. They collected thousands of gas station receipts, air travel documents and electricity bills to gather data on things like employees’ commutes, students’ trips home on breaks and overseas, and power consumed by campus buildings.

“No one had ever broken down the carbon footprint of Kenyon before,” said Dani Huffman ’19, an environmental studies major from Granville, Ohio.

Huffman and her fellow interns in the Office of Green Initiatives plugged their findings into software that calculated how much carbon was emitted by one gallon of gas, one mile of air travel and so on. Their data showed that Kenyon’s biggest source of carbon emission is purchased electricity, accounting for 60 percent of the College’s carbon impact.

Huffman cited this data during her physics course on solar power generation, which led to the installation of a solar panel system in Gambier — the second of its kind at Kenyon. A dozen more are being planned for students to install during the next six years.

After researching a legal studies project exploring the benefits of prison-exchange education, Maya Street-Sachs ’17 was inspired to bring a Kenyon course inside prison walls. The sociology major from Brooklyn, New York, worked with Assistant Professor of English Kathleen Fernando to enroll Kenyon in the Inside-Out Prison Exchange Program.

As a result, 10 Kenyon students and 10 prisoners enrolled in Fernando’s “In Transit” course, which was held at the Richland Correctional Institution, a medium-security prison for men. Despite its untraditional location, the class operated as a standard Kenyon seminar, with a syllabus that included classics by Charles Dickens as well as contemporary novels by Michael Ondaatje and Tayari Jones.

“We quickly achieved a level of trust that allowed us to discuss really serious topics, and to deal with differences respectfully and constructively,” said Schuyler Stupica ’19, an international studies major from Sylvania, Ohio, who wants to pursue a career in law. “I’ve never been in a class where time flew by so quickly.”

A team of four students is creating an app that will connect refugees to resources in their new communities and ease the workload on overburdened refugee-support organizations. Called DOXA after the Greek word for “opinion,” the app combines ideas behind popular apps like Coffee Meets Bagel and Coursera to create a centralized place where refugees can share their professional skills and learn about skills sought after by employers.

“Giving refugees a space to be part of a political community where they can show themselves and be heard is something we found to be really important,” said Jae June Lee ’17, a philosophy major from Cape Town, South Africa, who received funding from Davis Projects for Peace to Lee and his classmates, who plotted out the project over daily meals in Peirce Dining Hall, were chosen from a pool of 50,000 teams worldwide to compete for the Hult Prize, awarded to student startups that are tackling global issues.

Since graduating, the teammates have landed jobs at places like the Federal Reserve Board and JP Morgan Chase, but they continue to develop the app, which is being tested by a refugee agency in Columbus, Ohio.